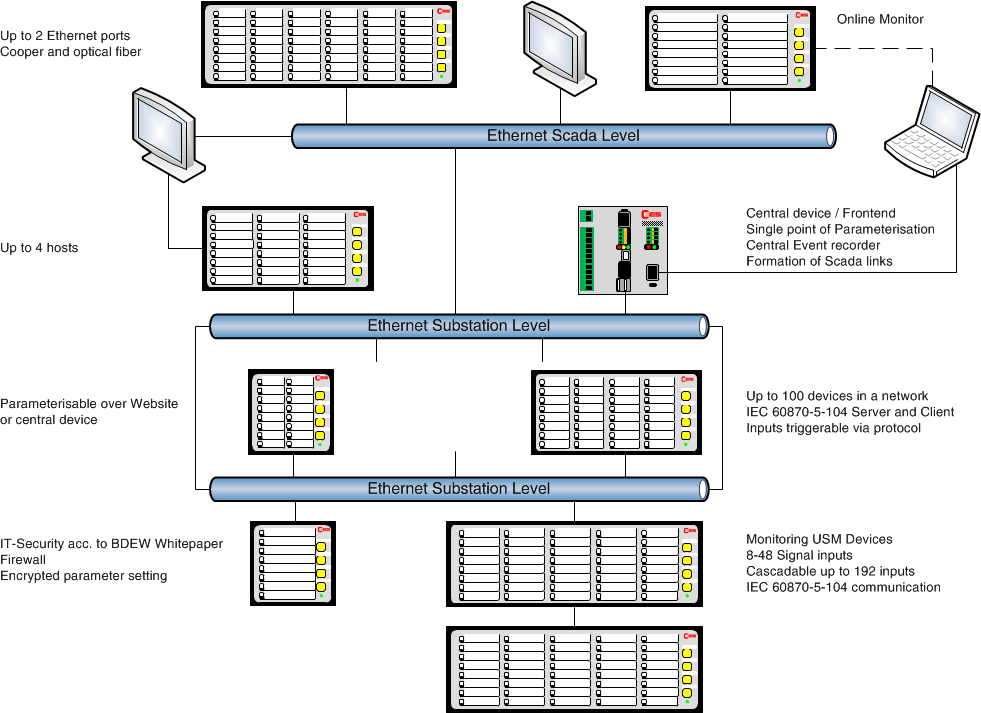 Large distribution network operators or transport network operators often have the requirement to set up a 2nd reporting path in order to receive essential or important individual messages in a failure situation of the 1st reporting path via an independent communication channel. The terms often vary, but basically, it is a redundant, independent reporting system that can reliably transmit parallel messages to the control system using standardized protocols.

Based on the history, fault annunciating systems are suitable for this purpose, which with their robust technology can reliably indicate states and issue alarms. EES has been producing and selling annunciator systems with communication interfaces according to IEC 60870-5-101 and -104 for more than 10 years, and they are already available in the 3rd generation. In spring, the software generation 4.0 will be introduced, which has an even wider range of functions.

With the redundant alarm system, up to 100 USM alarm boxes of different sizes with 8 to 48 inputs can be networked, which in turn can be cascaded with up to 4 devices. Thus, thousands of messages can be mapped in the system, which are sent to a central EES frontend and are processed here, e.g. to form a targeted collective message logic and to forward parameterizable important individual and collective messages to the control system. All communication between the message boxes is based on the standardized IEC 60870-5-104 protocol and the transmission to the control level is also based on this protocol. Alternatively, a serial IEC-60870-5-101 interface is also available. At station level, communication can also take place via IEC 61850. All protocols can also be operated in parallel.

The alarm boxes meet the latest, stricter requirements for IT security according to the BDEW white paper, including certificate-secured encrypted parameterization files. An integrated firewall only allows the necessary data traffic via open ports, access to the settings, as well as to the available online monitor and the reporting book, takes place via a secure HTTPS encryption. In the future, encryption of the data traffic and the communication protocol will also be optionally possible in accordance with IEC 62351-5.

In order to keep the configuration of the large number of alarm boxes as low as possible, it is possible to do this centrally via the USS Frontend. This automatically distributes the relevant information and parameter sets to the connected alarm boxes. For this purpose, data point lists can be loaded via generated Excel files or individually adapted import tools and thus parameter sets can be generated.

The alarm boxes can be equipped with up to 2 Ethernet interfaces in order to physically separate the communication level from the parameterization/diagnosis level or to serve hosts in different networks.

Many years of successful use by numerous customers show that networkable annunciator systems can successfully fulfill the task and that development is far from being at an end. The clear and unambiguous display of fault conditions is nevertheless deliberately retained and serves to facilitate rapid troubleshooting in an increasingly complex network structure.